Tirana, December 20 – The President of the Republic of Kosovo, Hashim Thaçi has been honored today with the medal “Honor of the Academy” by the Academy of Sciences of Albania. 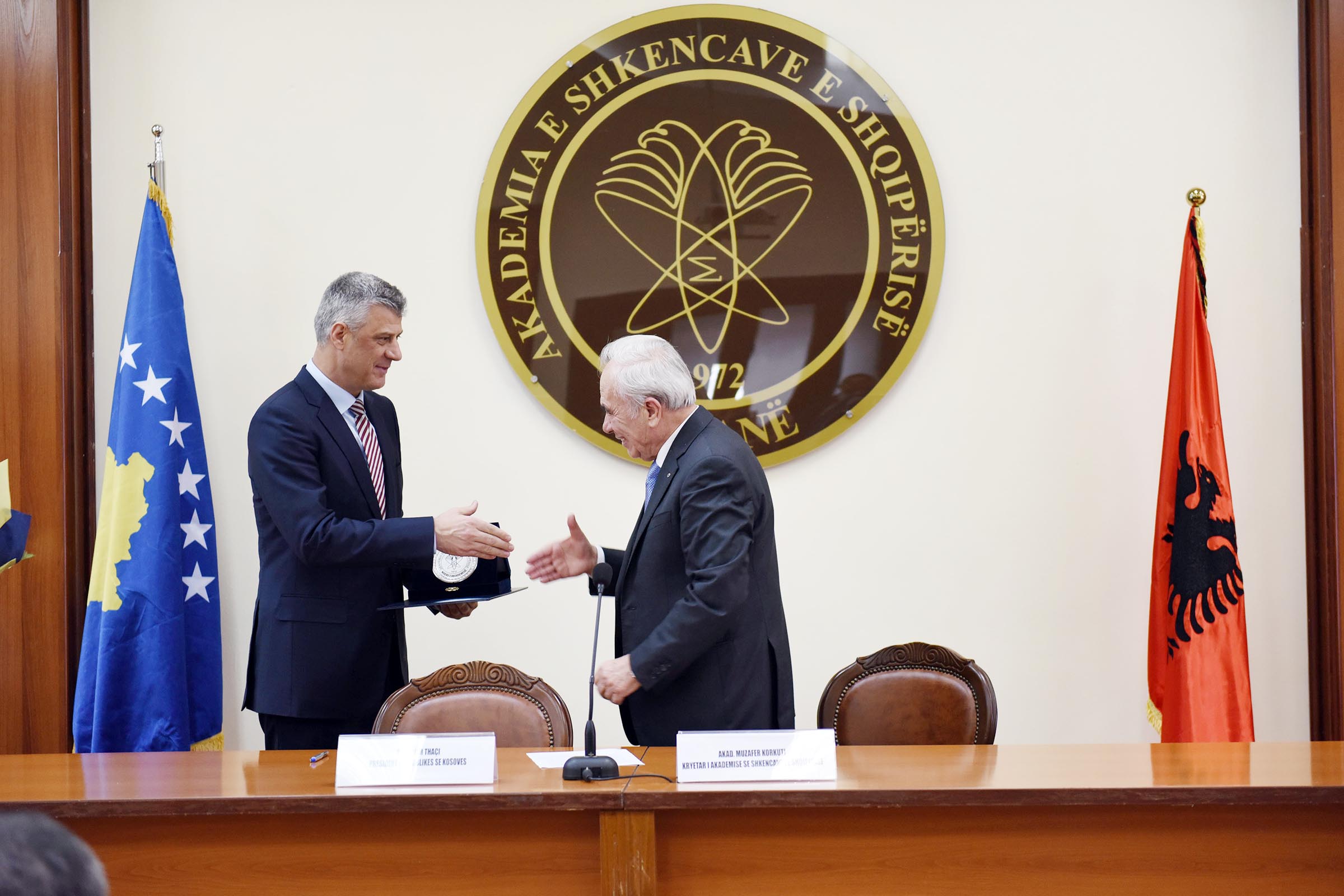 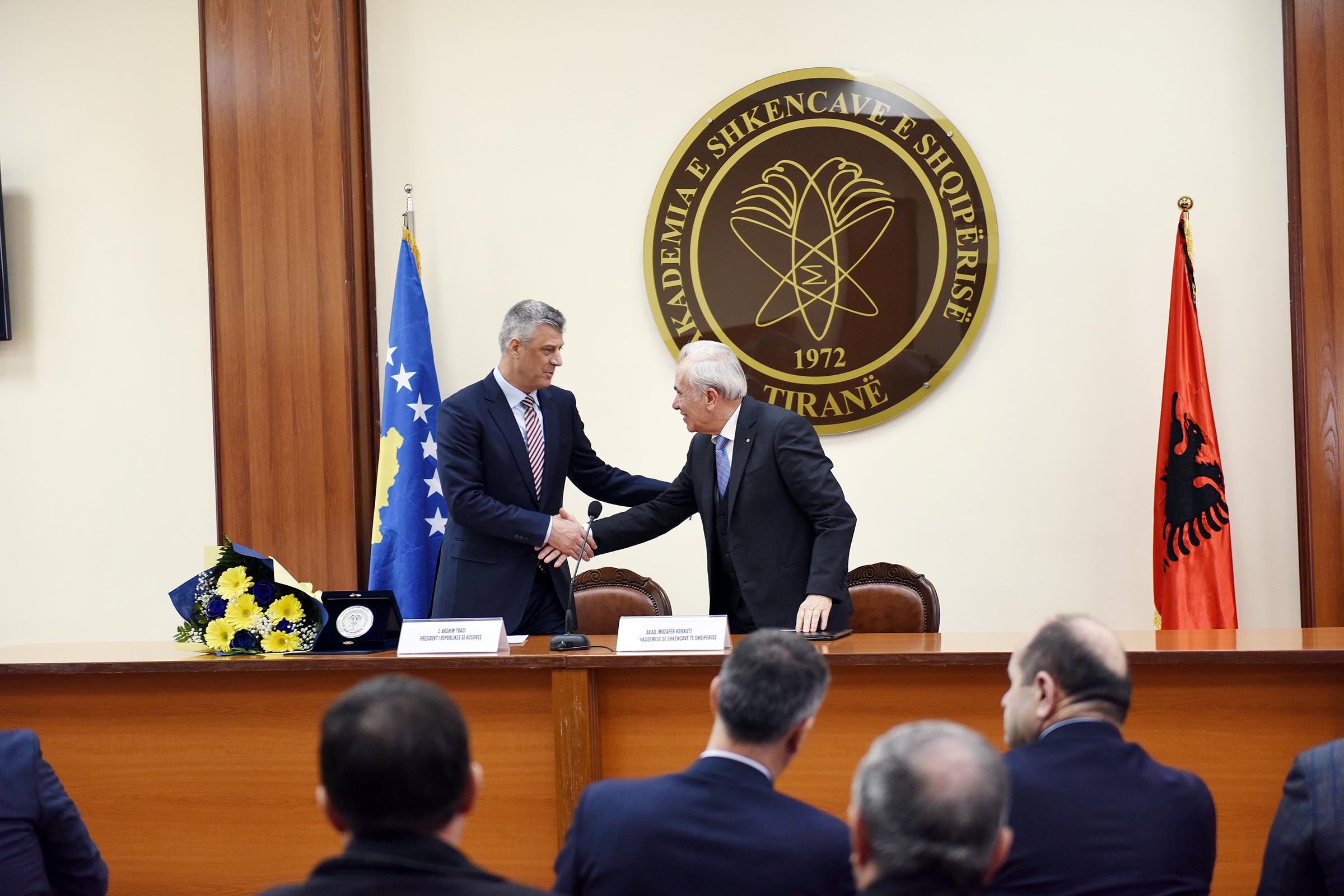 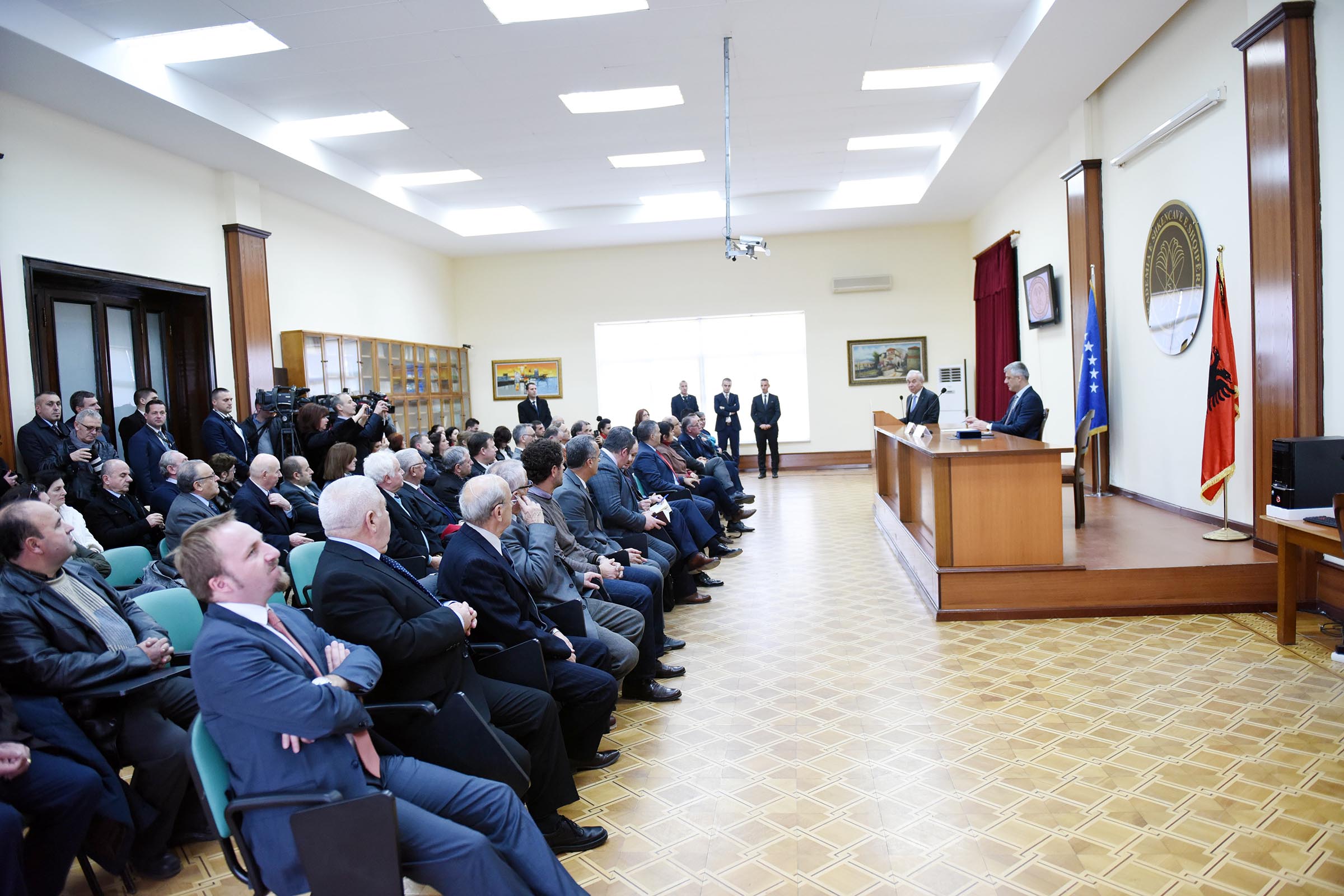 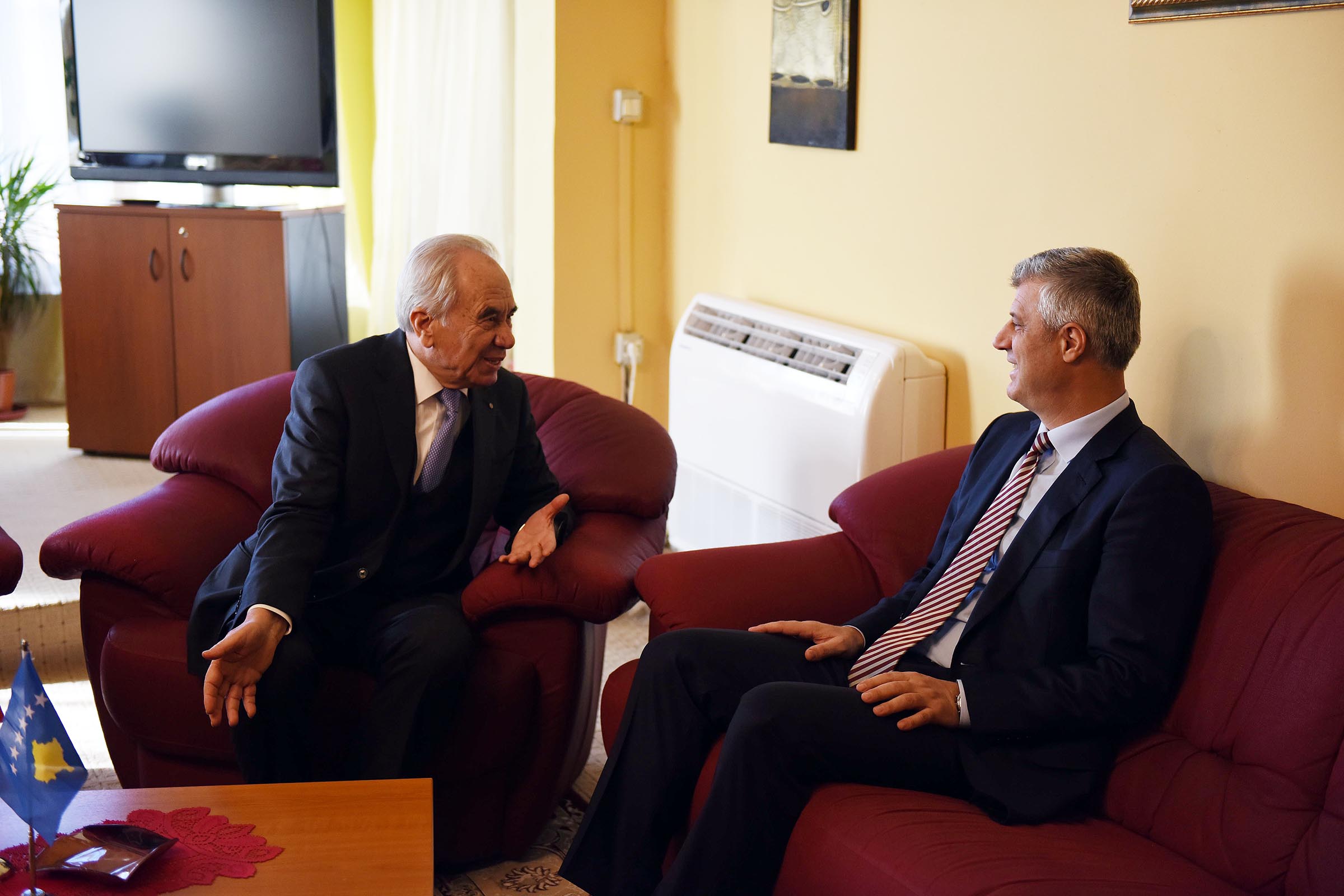 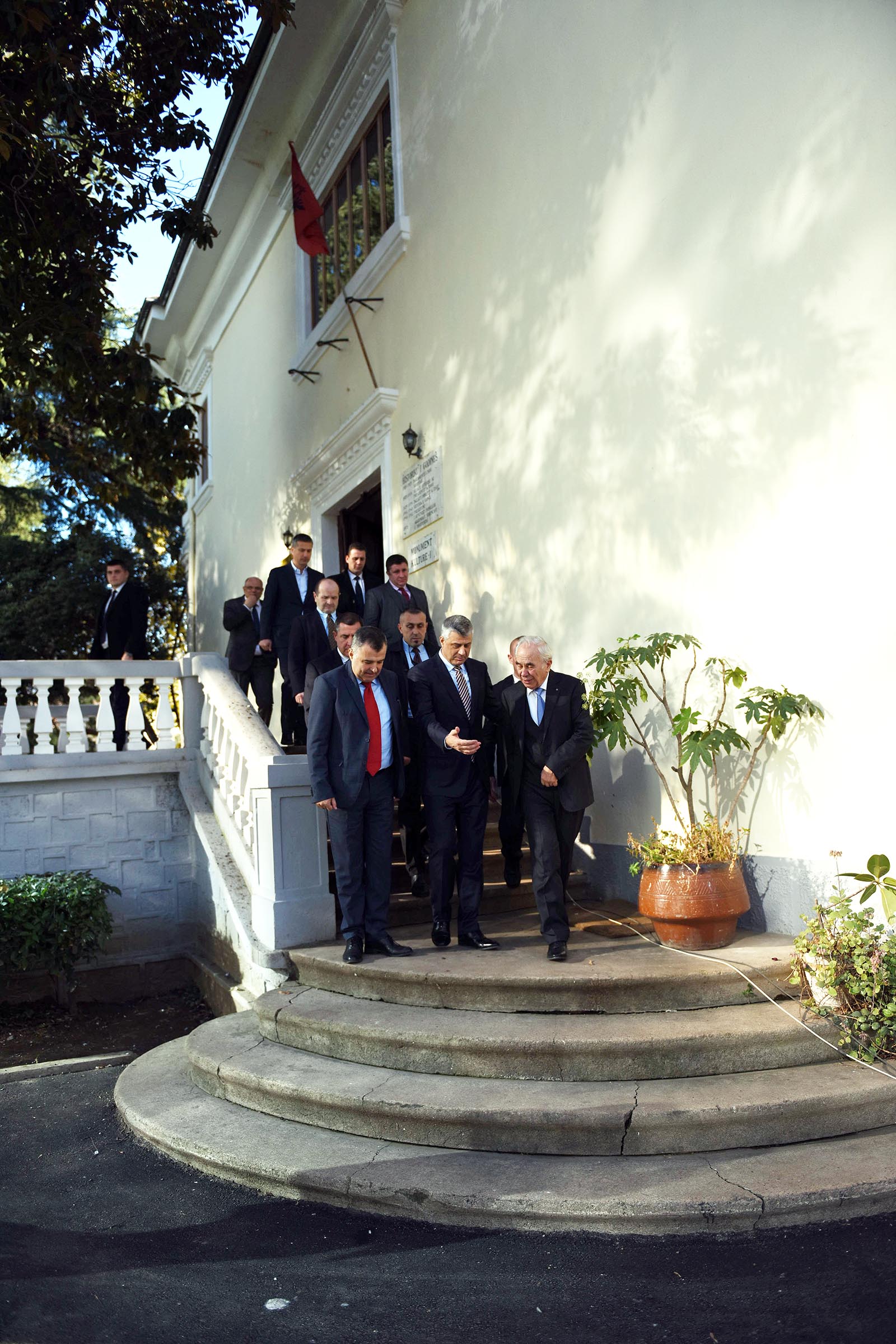 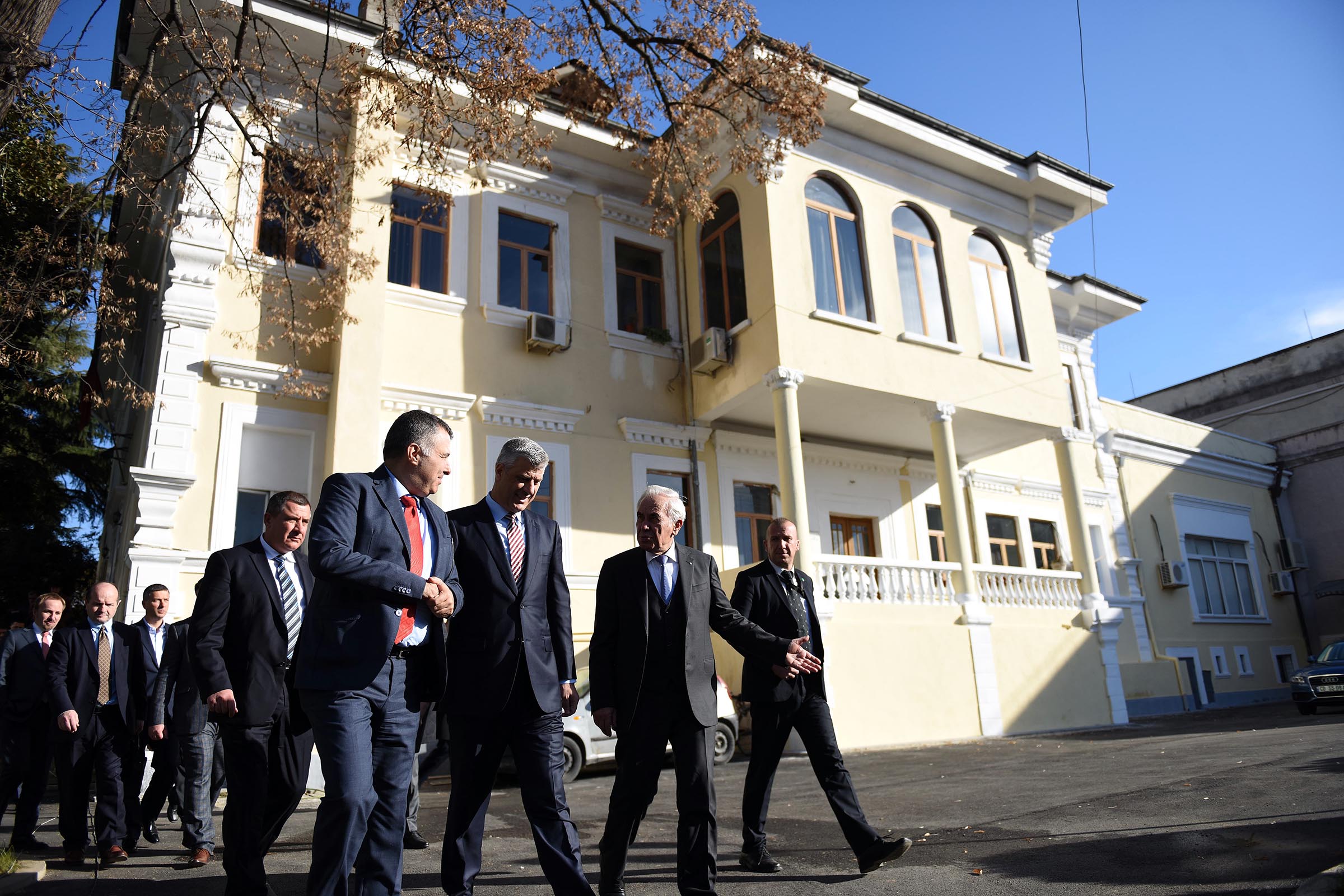 President Thaçi has thanked the members of the Academy for  awarding him this recognition, expressing deep respect for all the Albanian academics who have dedicated their life to scientific research.

President Thaçi has said that he considers this honor as an issue that concerns not only his contribution and name, but also with the comprehensive and representative symbolism the institution of the President of the Republic of Kosovo includes.

“Therefore I consider your prize an expression of honoring and appreciation for the strong bond that makes us feel equal, all over the Albanian historical space, despite some differences and obstacles history has created “, he added.

Before the academics, the President has stressed that the Albanian people have an inseparable language, researchers in Kosovo and Albania have great space for research about the linguistic assets, about the oral heritage, the diverse spiritual treasure still preserved by the people.

“Many efforts have been made to separate Albanians in identity as well, as the history with imposed borders has divided them unfairly in the past century. But you remain guardians of this identity, which was created by the centuries of the millennium, you are the guardians of the national symbols”, he added.

According to him, the present world is not only the world of independence, but also of interdependence, where today’s Europe, which is the object of geopolitical aspirations in Kosovo and Albania, is the model of this interdependence.

Speaking about the aspirations of Albanians to join the EU, President Thaçi pointed out that besides the Albanian national identity, we also have a European identity.

He said that we must understand this reality, recognize and accept it, to learn to live interdependently like all civilized countries, but preserving the language, identity, traditions, historical specifics.

“Who can give us lessons and advice on how to protect these enrichments better than the scientists of Albanology, under the new circumstances in which we live and in front of the challenges that await us. Therefore the role of the academies and academics in this regard will increase, the responsibility of the national sciences will be empowered”, said Thaçi.

At the end he emphasized that it is very important for both Albanian academies, for the other scientific institutions, to contribute maximally to remove any obstacle to have a single cultural, linguistic, literary, spiritual space.

“If for state borders two parties are insufficient to make decisions, about the borders of the national Albanian scientific and cultural space everything is in our hands”, he said.

Whereas, Prof. Dr. Muzafer Korkuti, President of the Academy of Sciences of Albania has said that with this recognition, we would like to appreciate your mission in charge of the Republic of Kosovo, a mission that you have crowned at auspicious times and in difficult times.

“The decision to appreciate your contributions at a very high level, which are historical, we solemnly award you the recognition “Honor of the Academy”. Our Academy of Sciences was the first that, through the publication in several languages of the book “Kosovo, an encyclopedic overview”, made your merits as the man who stood on top of Kosovo’s independence process universally recognized”, he added.

Academic Korkuti pointed out that in charge of these missions, as Head of the Government and as Head of State, Thaçi has been equally sensuous as the academic and university world in Kosovo and Albania for the preservation and the inauguration of the spiritual inheritance of the Albanian people.

“Our two academies are cooperating with projects and programs, initiatives and joint organisms. Knowing very well that you belong to that generation to whom national consciousness had priority over any other factor: political, national, religious, regional, cultural, we are full of confidence that the institutions that are charged with the primary issues of the Albanian world and our mutual cooperation will have the presence of your positive influence”, he said.

In the citation of the awarding of the recognition “Honor of the Academy” for President Thaçi, among others it is said “Figure of crucial importance in the defense of the unit of national identity, the Albanian language and fundamental values”.