Last train to a lasting peace

Kosovo and Serbia have been negotiating under the auspices of the European Union and the strong support of the United States towards the goal of normalisation of relations for over six years now. While we have to recognise that important strides have been taken in that direction culminating with signing of the First Agreement on Principles Governing the Normalization of Relations between Kosovo and Serbia in 2013, full normalisation of relations remains an unattained goal.

Our two countries and peoples aspire to build a better future, one where they are fully integrated in the European family (and in Kosovo’s case the Euro-Atlantic family too) and to a future where they enjoy a higher standard of living and state of wellbeing than is currently the case. But it is unlikely that these goals can be reached with the continuation of what is essentially a frozen conflict between our two countries.

So far, Kosovo and Serbia have had three rounds of international negotiations: in Rambouillet in 1999, in Vienna in 2005-2007 and now in Brussels since 2011. I have been part of all three negotiations and I am proud to say that Kosovo always agreed to the deals that were mediated by the international community. Serbia on the other hand, does not recognize the independence of Kosovo and continues to put a lot of resources in undermining our efforts to solidify Kosovo’s standing internationally. Due to this hostile attitude, Serbia’s aspiration for membership in the EU remains uncertain. Hence, both countries are blocked and their Euro-Atlantic future depends on their ability to reach a historical final agreement on normalisation of relations and reconciliation.

The negotiations in Brussels have dragged on. The April 2013 agreement was a political triumph, but it has now been four years since it was struck and the implementation of some of the items from that agreement is still lagging. While the technical nature was a prerequisite to get the talks off the ground, it is now time to address the elephant in the room; the issue that makes the implementation of even the most technical agreements difficult: the lack of reconciliation and mutual recognition.

The credibility of the negotiations has been called into question even as we make progress in certain areas, because it is clear to any observer of these dialogues that the antagonism between the countries is as alive today as it has ever been. For instance, while the Brussels talks produced an agreement on Kosovo’s participation in regional organisations, Serbia keeps campaigning vigorously against membership bids to international organisations made by Kosovo, even when those memberships would benefit the cultural heritage of the Serbian Orthodox Church in Kosovo (the bid for UNESCO) or the Kosovo Serbs.

The incremental successes on isolated points have all been important, but at this speed, our relations would become normalised perhaps 100 years from now. It has become obvious that the time has come for a bigger and bolder vision and leadership to address the issues between us for good. The fundamental issue is of course that we continue to view each other as adversaries.. Sweeping our deep divisions under the carpet is no solution and will not lead to reconciliation. We cannot agree on where we are going if we have fundamental disagreements about where we are coming from. This is why I have redoubled my efforts in dealing with some of the most difficult questions about our past through establishing a Truth and Reconciliation Commission.

Ultimately, we believe the way forward would be to sign a final Agreement on Normalisation and Reconciliation between our two countries. Through it, we would commit to resolve all disputes by peaceful means. Ultimately, the historical agreement between Kosovo and Serbia should include the mutual recognition as the only way to end all the disputes once and for all.

Achieving this end goal is extremely difficult for both countries and it requires brave and smart leadership. I strongly believe that both in Kosovo and in Serbia the leadership remains committed to what our people expect from us – to make peace with each-other. For that to happen, we all need to be creative and be prepared to make further compromises. It should become clear to everyone that doing this for the sake of lasting peace for our people and the generations to come is imperative.

Just as the final resolution of our conflict has to recognise both historical and current realities, it also needs to address the demands of the future. The future of Kosovo and Serbia, indeed as that of the rest of the Balkans, is as friendly neighbours within the European Union. I am convinced that normalisation and reconciliation is the first step to free us from the weight of the past, and a step that will propel us into a brighter future. It goes without saying that once we do that, the European Union should recognise our efforts, and that as we shift a gear in our corner of Europe, a gear must be shifted on the accession train in Brussels and European capitals alike. We must make sure we do not miss the last train to a lasting peace. 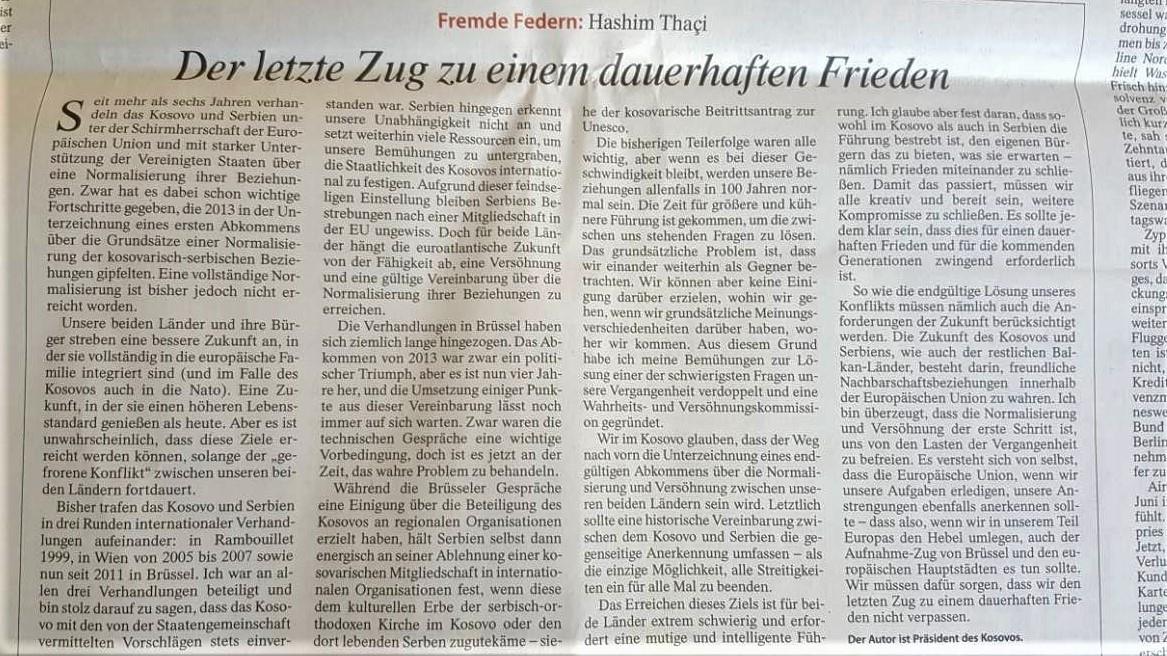