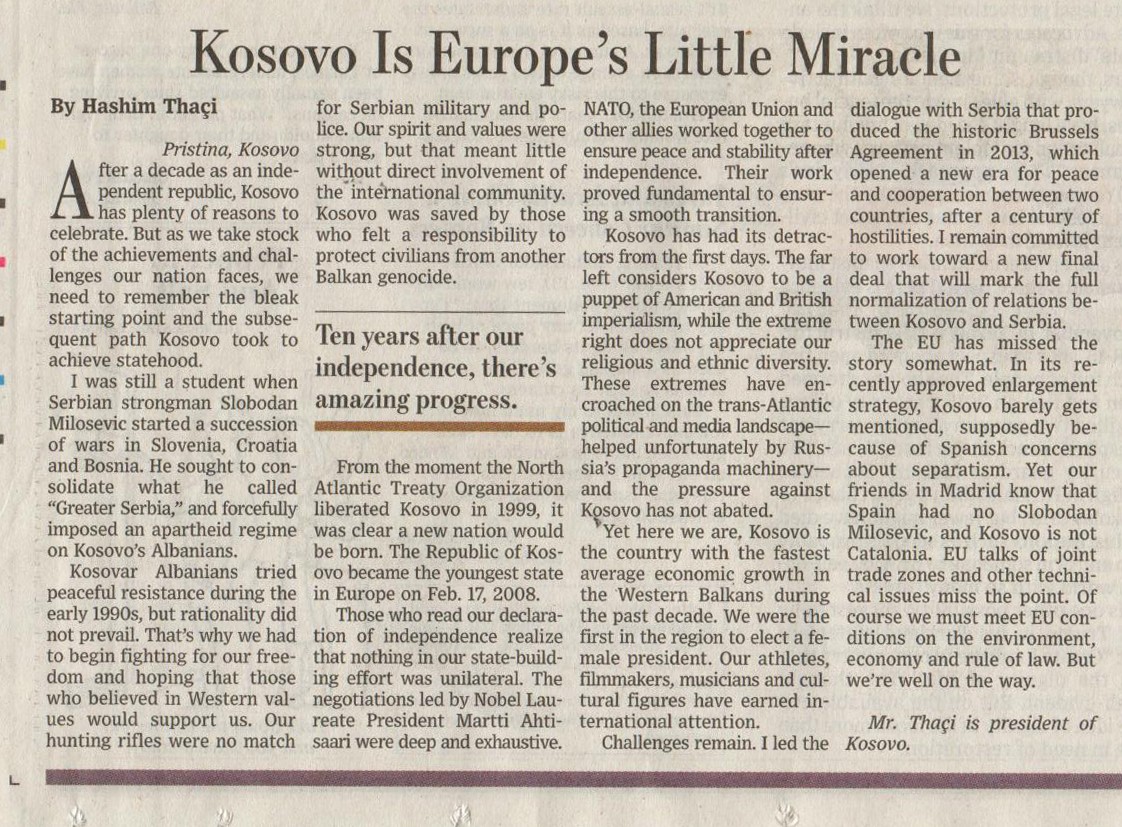 Writes for “The Wall Street Journal”: Hashim Thaçi, President of the Republic of Kosovo

after a decade as an independent republic, Kosovo has plenty of reasons to celebrate. as we take stock of the achievements and challenges our nation faces, we need to remember the bleak starting point and the subsequent path Kosovo took to achieve statehood.

I was still a student when Serbian strongman Slobodan Milosevic started a succession of wars in Slovenia, Croatia and Bosnia. He sought to consolidate what he called “Greater Serbia”, and forcefully imposed an apartheid regime on Kosovo’s Albanians.

the Kosovar Albanians tried peaceful resistance during the early 1990s, but rationality did not prevail. That’s why we had to begin fighting for our freedom and hoping that those who believed in Western values would support us. Our hunting rifles were no match for Serbian military and police.

Our spirit and values were strong, but that meant little without direct involvement of the international community. Kosovo was saved by those who felt a responsibility to protect civilians from another Balkan genocide.

From the moment the North Atlantic Treaty Organization (NATO) liberated Kosovo in 1999, it was clear a new nation would be born. The Republic of Kosovo became the youngest state in Europe on February 17, 2008.

Those who read our declaration of independence realize that nothing in our state-building effort was unilateral. The negotiations led by Nobel Laureate President Martti Ahtisaari were deep and exhaustive. NATO, the European Union and other allies worked together to ensure peace and stability after independence. Their work proved fundamental to ensuring a smooth transition.

Kosovo has had its detractors from the first days. The far left considers Kosovo to be a puppet of American and British imperialism, while the extreme right does not appreciate our religious and ethnic diversity. These extremes have encroached on the trans-Atlantic politic and media landscape – helped unfortunately by Russia’s propaganda machinery – and the pressure against Kosovo has not abated.

Yet here we are, Kosovo is the country with the fastest average economic growth in the Western Balkans during the past decade. We were the first in the region to elect a female president. Our athletes, filmmakers, musicians and cultural figures have earned international attention.

The challenges remain. He stressed that he has led the dialogue with Serbia that produced the historic Brussels Agreement in 2013, which opened a new era for peace and cooperation between two countries, after a century of hostilities. He also state to remain committed to work toward a new final deal that will mark the full normalization of relations between Kosovo and Serbia.

The European Union has missed the story somewhat. In its recently approved enlargement strategy, Kosovo barely gets mentioned, supposedly because of Spanish concerns about separatism.

Yet our friends in Madrid know that Spain has no Slobodan Milosevic, and Kosovo is not Catalonia. EU talks of joint trade zones and other technical issues miss the point.

Of course we must meet EU conditions on the environment, economy and the rule of law. But we’re well on the way.