President Thaçi writes to President Trump, pledges to work towards a historic agreement with Serbia

At his letter addressed to President Trump, President Thaçi pledges to accomplish his share of work and that he shall urge the citizens to follow the call made by President Trump in his December letter to “speak with a unified voice during the peace talks and refrain from actions that would make an agreement more difficult to achieve”.

President Thaçi assured President Trump that he will be willing and ready to make the necessary compromises needed to achieve the comprehensive and balance settlement which would encompass all outstanding issues, thereby ending the century-old long conflict with Serbia.


This is the content of the letter sent by President Thaçi to President Trump:

Let me begin by wishing you and your family a Happy New Year and great success in 2019. People of Kosovo and I were particularly pleased by your letter to me, of December 14, 2018, in which you expressed America’s unshakeable support for the “independence and sovereignty” of Kosovo.

As we discussed in Paris - and as I explained in further detail to Secretary of State Mike Pompeo and National Security Adviser John Bolton during my recent visit to Washington DC - I agree with you that an agreement that will resolve all the outstanding issues between Kosovo and Serbia is now within reach.

To this end, let me give you my personal assurances that as Kosovo’s President I will be ready and willing to make compromises necessary to reach a comprehensive and balanced settlement that will encompass all outstanding issues, thereby ending the century-old conflict with Serbia, and bringing peace to the whole region.

Let me emphasize, Mr. President, the historic nature of what we are contemplating. The emerging agreement will not be an interim peace or a frozen conflict. We are trying to break the pattern and achieve a permanent agreement in which both sides recognize each other and renounce further conflict, and in which Kosovo â€‹joins the United Nations as a member state.

Achieving such an historic breakthrough will require maximum effort by both parties. I pledge to do my part. And I will urge my fellow Kosovars to follow the call in your December letter, “to speak with a unified voice during the peace talks, and refrain from actions that would make an agreement more difficult to achieve.”

I look forward to working closely with you and our many friends in the United States as this diplomatic initiative unfolds. And as you generously suggested, I can think of no better way to celebrate our success than to follow your leadership and join you at the White House, where peace and history are together made.

At the end, let me use this opportunity to invite you, dear President, to visit Kosovo, meet the most pro-American people as well as Americans serving in Kosovo, and witness our joint success in building a multi-ethnic Kosovo, committed to peace, freedom and justice.

President of the Republic of Kosovo 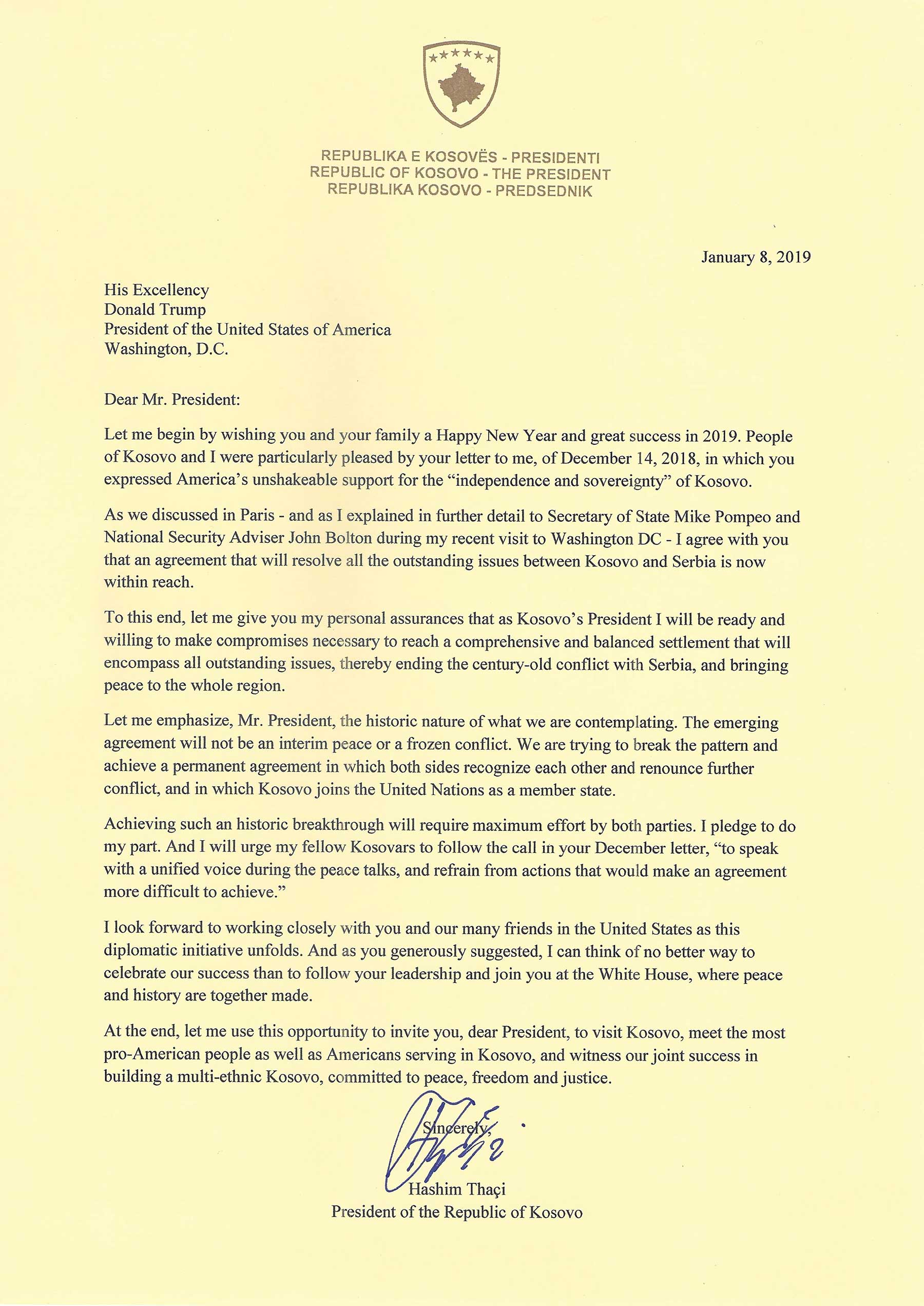